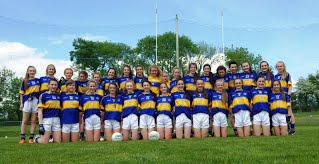 Having defeated Cork in their last âAâ assignment during April hopes were high that this Tipperary team would compete with a strong Kerry under 14 selection in this the âAâ Munster final. Tipperary had also previously defeated Limerick, Waterford & Clare en route to this final so a fine crown settled into the Mallow GAA complex in anticipation of a close encounter on Saturday 28th May.

Right from the start the Kerry ladies had a score from play from Danielle OâLeary and this trend continued for the early minutes with Kerry proving deadly accurate from distance while the Tipp ladies found it almost impossible to penetrate an excellent Kerry defence. Kerry appeared in no mood to allow any signs of weakness and with six minutes played were three points ahead. In the ninth minute Kerry Captain Siofra OâShea goaled from a penalty and try as they might Tipperary could not match the Kerry ladies power and footballing ability. Worse was to follow when less than three minutes later Kerryâs Rachel Dwyer scored a second goal from play to put Kerry ahead 2:03 to no score. Tipp had a pointed free from Aisling Ryan in the sixteenth minute and when Ava Fennessy scored a fine goal four minutes later it looked as if a mini revival was about to occur. Kerry however did not panic and they replied with a goal and four points in the next five minutes to again put daylight between the sides. Try as they might and try hard they did the Tipp girls were not allowed any time or space on the ball to make it matter. It was constant Kerry pressure and the Kerry Captain S OâShea in midfield was excellent setting up attacks and taking her own scores also. 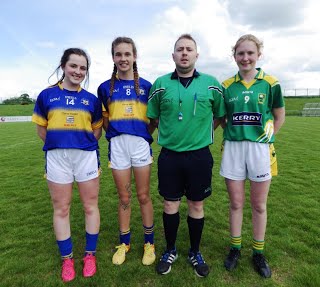 Tipperary began brightly in the second half with a nice Ciara Dwan point from play to which Kerry replied immediately. Tipperary now had two wides and Kerry again added a point.  Whatever hopes Tipp had of staging a comeback were dashed when Kerry again goaled in the fifth minute, Tipp 1:02 Kerry 4:08. In fairness to the Tipp ladies they now began pressing forward more and great cheers greeted a Tipp goal from midfielder Caitlin Kennedy who soloed through for a fine individual score in the ninth minute. Right form the kick out Tippâs Ava Fennessy had another Tipp goal to make the scores respectable, Tipperary 3:03 Kerry 4:08. The two teams then traded points but from the twentieth minute on Kerry again got on top and now gave an exhibition of point scoring from distance, scoring that would do justice to many senior sides. Kerryâs OâShea, Dillane & Teahan added a further five points between them before Tippâs Caitlin Kennedy had the premier ladies final score from play in stoppage time. Goals may win games on many occasions but in this final it was the Kerry ladies ability to pick off points from outfield that proved the match winner.

The Munster Cup was presented afterwards to the Kerry Captain Siofra OâShea who was also awarded player of the match. For the past fifteen years Kerry & Cork have been the only two names on this Munster âAâ Cup and this has not changed in 2016. Tipperary will have little time to dwell on this defeat as they are back in action next Wednesday, June the 1st in the Munster âBâ final where Limerick await. Should they be able to raise themselves in time for this encounter they are more than capable of going far in the All Ireland âBâ series.