You are here: Home / Lidl All Ireland Senior B PPS Championship Semi Final 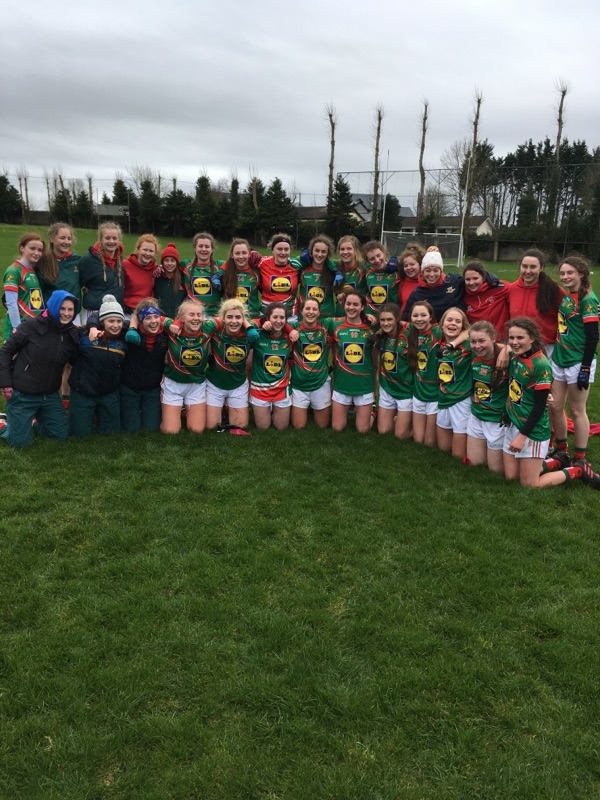 Loreto Clonmel booked their place in the Ladies Football All Ireland B Post Primary Schools Competition thanks to a great win at Banagher on Tuesday March 7th. Their opposition of Sacred Heart Westport had to give way to a stronger and more skilful Clonmel side who showed great commitment and willingness to contest every ball right from the throw in. The Clonmel side had the aid of the strong breeze in the first half and made good use of the elements as they began to clock up the points. Orla Burke opened the scoring and some excellent attacking play fed by the hard working centre field players and surging runs from the half back line soon had Clonmel Loreto establish a comfortable lead. Some of these scores were very well executed and top class. On twenty minutes the Clonmel side led by 0-9 to 0-0 with all six forwards having registered scores. Westport were having difficulty in settling and their attacks were well marshalled by a vigilant Clonmel backline. Westport registered their first score and began to show why they were worthy Connacht Champions. They came back into the game strongly scoring a goal leaving the half time score Clonmel Loreto 0-12 Westport 1-1.

With wind at their backs Westport threw themselves into the challenge. A brilliant Claire Moore save denied them the goal that they needed to revive their chances. Clonmel continued to scores points from opportunities and maintain their lead. On forty minutes Sadbh Hallinan was sinned binned and Orla Burke withdrew into defence to batten down the hatches and contain Westport. Clonmel weathered this ten minute period well and Sadbh returned onto the field of play into forwards scoring a goal just before the end of the game. It would be unfair to single out any one player as everyone played their hearts out in a great team performance. Loreto had to line out without Captain Aisling Deely and full back Maeve Ryan both unavailable due to injury and illness. The strength of the panel was evident by the quality of available players as replacements. The final is due to be played on March 26th and all in Tipperary Ladies football wish the very best of luck to the team, management and the school in the final. Final Score Loreto Clonmel 1-19 Sacred Heart Westport 1-6