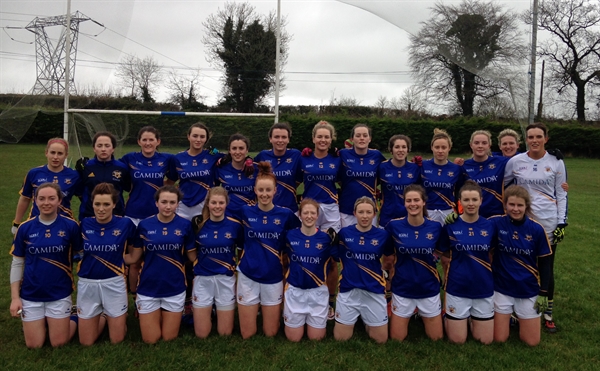 A wet and windy Ballycumber, Offaly was the venue for the fifth round of the Lidl National Football League for the Tipperary Intermediate Ladies Footballers who were playing the hosts, Offaly. Offaly had the aid of the breeze which was blowing at a slight angle up the field and were first to the score board with a pointed free from Mairead Daly in the second minute. The heavy ground meant that play was arduous and in the eleventh minute Aishling Moloney scored a goal for Tipperary putting them ahead. This was not to last, as Offaly’s Aoife Corbett and Mairead Daly pointed to equalise the game on the twentieth minute. Bernie Walsh and Mairead Daly gave Offaly the lead again when they added two further points to Offaly’s score line. Alison Lonergan added a point on the twenty fifth minute and the sides traded points just before half time to go in at half time Offaly 0-6 Tipperary 1-2.

The margin of the point at half time was reduced in the first minute of the second half when Aishling Moloney pointed to equalise. From the kick out the ball was fed back down the field to Aishling Moloney who passed to Alison Lonergan to raise the green flag, putting Tipperary back in front. Aishling pointed in the thirty seventh minute before setting up Emma Buckley for another Tipperary goal moments later. Gillian O’Brien added another point to the score line so that Tipperary went into the final quarter Tipperary 3-6 Offaly 0-6. Scores had evaded Offaly until the forty sixth minute when Aoife Corbett added their only point of the second half to their score line. As both teams made changes, Tipperary continued to dominate and an Aishling Moloney goal followed by 1-1 for substitute Aisling McCarthy ensured a comprehensive victory for the travelling Tipperary side - Tipperary 5-7 Offaly 0-7.

Tipperary have an unbeaten record to date and will now look forward to their next game at home in Ardfinnan on Sunday, March 26th when their opponents will be Leitrim.