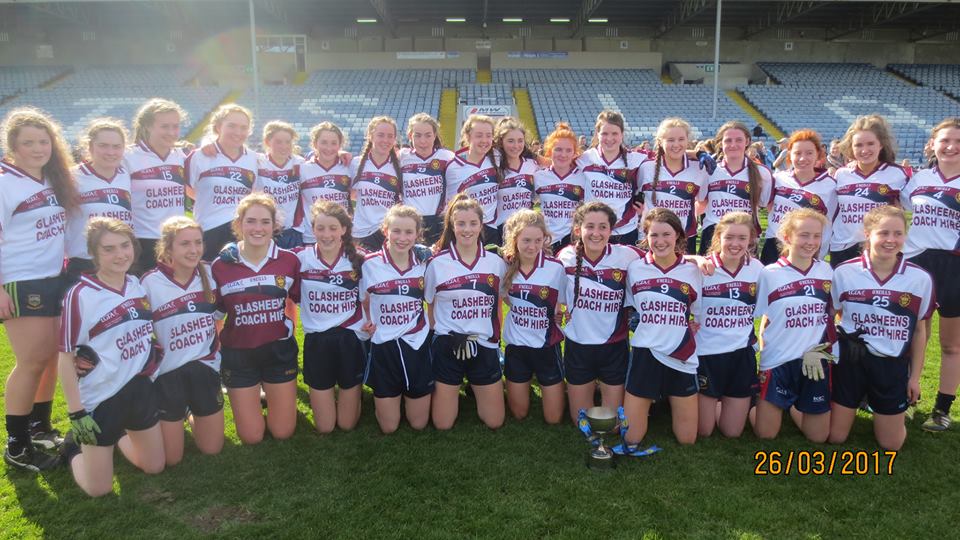 The Presentation Thurles claimed an All Ireland title on Sunday afternoon, when they were crowned Lidl PPS Senior C ladies football champions. This was a first Ladies Gaelic Football Final for both schools and a historic win for the Presentation with previous All Ireland achievements in Camogie, Basketball, Soccer and Volleyball. O’Moore Park, Portlaoise was the venue and after a few days of sunshine the underfoot conditions were good. However, there was a swirling breeze which slightly favoured the Thurles girls in the first half.

The game burst into action with the crossbar assisting Clontarf twice in the first minute, from the first attack the Presentation were awarded a penalty with the Holy Faith full back and captain Ann Shannon sin-binned. Sarah McKevitt struck the penalty very well but the Clontarf goalie manage to parry the shot onto the crossbar and then McKevitt collected the rebound only to see her second kick also rebound off the crossbar. Then in the second minute with Clontarf's first attack Emma Purcell the Thurles corner back was sin-binned and the resulting free was the first score. A strange sequence of events where both teams were reduced to 14 players before any score was registered. The game was now flowing from end to end with both defences on top and Clontarf choosing to go low from a free. In the seventh minute Presentation registered their first score, a goal by Casey Hennessy with Lauren McCormack providing the pass. Holy Faith hit back to level the scores with two points, one from a free in the eighth minute and the other from play in the eleventh minute. The Presentation scored their first point in the fourteenth minute with an excellent effort from Saoirse O'Meara and again Holy Faith levelled within a minute. The Presentation half forward line of McKevitt, Ryan and Hennessy was creating space and causing panic in the Clontarf defence and in the seventeenth minute Lauren McCormack scored their second goal but once again within 2 minutes Clontarf were on level terms with a goal from Aoibhe Bell, however this was to be their last score in the first half. With Marie Creedon operating in the sweeper role and making some excellent interceptions the Presentation defence were on top for the remainder of the first half. In the 21st minute Saoirse O'Meara scored her second point and within a minute Casey Hennessy had her second goal. In the last few minutes of the first half both Hennessy and McCormack adder further points leaving the half time score line, Presentation 3-4 to Holy Faith 1-4.

The Presentation made a change at half time introducing Ellen Moore for Emma Purcell but it was Clontarf who made a great start scoring two points, one from play and the other from a free. Then Casey Hennessy settled the Presentation's nerves with a point in the thirty third minute, but once again Clontarf reduced the margin to four points. In the thirty ninth minute, Grace O'Donnell was introduced for Muireann Lloyd with Niamh Ryan moving to corner back. The Thurles girls were struggling to get primary position from their own kick outs and there was a few minutes of Clontarf pressure. The  energetic Muireann O'Connell lifted the siege with a forty meter run that ended with a Saoirse O'Meara point. Both teams then exchanged points from placed balls and on the forty fourth minute, Jenny Irwin was introduced replacing Lauren McCormack and as the game entered the final quarter both teams again exchanged points from frees. The work rate of the Presentation half back of Katie Ryan, Aoife Maher and Dervla Heffernan was now producing some key interceptions and with excellent running by Roisin Daly and Muireann O'Connell continuing to create gaps in the Clontarf defence. Sarah McKevitt assumed free taking responsibilities and extended the lead to 5 points in the forty sixth minute. In the fiftieth minute, full back Aoife Finlay made a super save from a goal bound Clontarf free and after some exchanges of passes the ball was offloaded to McKevitt for another white flag. With the game entering the final minutes the Presentation introduced Jessica Hayes and Aoibheann Clancy and the on fifty seventh minute a Sarah McKevitt 45 went all the way to the net. Although now in arrears by ten points Holy Faith kept going and received just reward with a goal in the fifty eighth minute by Hannah McLaughlin. As the game entered injury time Saoirse Fanning brought off a great save deflecting the ball over the bar and one minute into injury time player of the match Casey Hennessy completed the scoring with a well taken point.

Congratulations to all the girls on the panel it was a real team performance with excellent levels of work rate, fitness and skill and to the management team for their time and dedication in guiding the girls. It has been a long journey to the All Ireland final which has seen them travel to Cork, Limerick and Galway. The parents have travelled every step of the way and been a huge support to the players and the school. The players themselves sacrificed their Mid-Term holidays to come into school and train and that dedication has been rewarded with a Munster and now All Ireland title. Only two of the panel are sixth years which makes the achievements of the girls even more impressive.