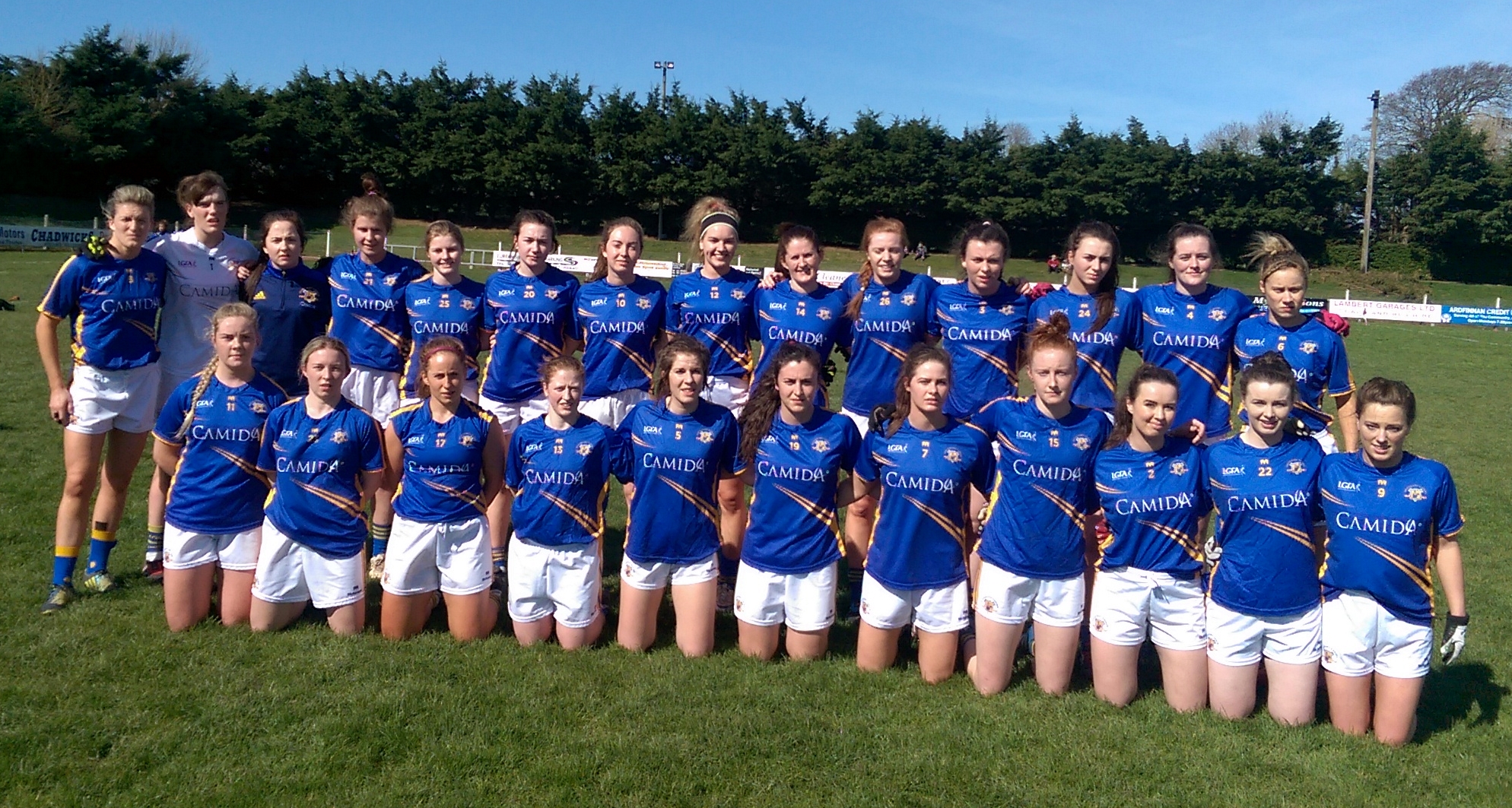 Tipperary qualified for their second League final in succession and brought their unbeaten run of games in the Division 3 League to eight. Offaly were the opposition in the semi-final at wind swept Clane on Easter Sunday, April 16th. Tipperary would play into a stiff breeze in the opening half and were quick out of the blocks with Aisling McCarthy opening the scoring with two points from play and then turned provider when she found Orla O'Dwyer who laid off the ball for Aishling Moloney to score Tipperary's opening goal. Orla O'Dwyer followed up with another Tipperary goal which was followed by a point from Aishling Moloney. Offaly opened their account with a goal and quickly followed with a point to leave the score line 2-3 to 1-1. Further goals from Aishling Moloney, Mairead Morrissey and Caoimhe Condon helped Tipperary to a very worthy half time lead of 5-10 to Offaly’s 2-1.

All Tipperary forwards were on the score board at this stage and they were absolutely buzzing with confidence after some very well kicked points and great passing movements of play leading to high quality scores. Tipperary began the second half where they left off in the first. Points from Gillian O’Brien, Mairead Morrissey and Caoimhe Condon were followed by another goal from Mairead Morrissey after a good pass from Aishling Moloney. At this stage Tipperary made changes with Niamh Lonergan and Eimear Myles replacing Orla O'Dwyer and Jennifer Grant. Tipperary soon added another goal through Aishling Moloney, with Offaly replying with two points. Further changes saw Catherina Walsh, Aoibhe O'Shea and Roisin McGrath replacing Mairead Morrissey, Gillian O'Brien and Emma Buckley. Tipperary added three further points through Aisling McCarthy, Aoibhe O'Shea and an Aishling Moloney free to leave the final score 7-16 to 2-6.

This was a great team performance with Lauren Fitzpatrick very solid in goals bringing off one exceptional save early in the first half when there was only three points between the sides. The full back line of Brid Condon, Siobhan Condon and Elaine Kelly were on top all through. The half back line of Emma Buckley, Samantha Lambert and Maria Curley worked tirelessly in defence and launched many counter attacks. In mid field Elaine Fitzpatrick and Jennifer Grant were on top throughout the game and kept the on form forwards well fed with scoring opportunities. 7-17 is a fine score and underlines the brilliant form of the Tipperary forwards. All in all Tipperary produced a very admirable display that lifted them to new heights and puts them in a good place as they prepare for the league final. However heading into a final on the back of a big win is often as much of a burden as it is confidence booster. Wexford will be Tipperary’s opponents in the final. Shane Ronayne will be all too conscious of the stern test Wexford provided in the opening round of the league. On that occasion Wexford led by nine points into second half and had it not been for a wonderfully brave effort from Jennifer Grant to prevent another Wexford goal there would probably have been no way back for Tipperary. They rallied magnificently to win that game and have not been beaten since. All in Tipperary wish the team and management the best of luck in the league final and hopefully the support will turn out in force to see this very impressive team in action.

AISLING Moloney fired a hat-trick of goals as Tipperary maintained their 100 per cent Lidl Ladies National Football League record in 2017, while also progressing to a Division 3 final against Wexford.

Tipperary hammered Offaly by 7-16 to 2-6 in Clane, as Wexford, with former Kerry captain Bernie Breen in their ranks, overcame Roscommon by 5-8 to 0-9 at the same venue in Sunday’s semi-final double-header.

Tipp played with the breeze in the opening half and by the interval, the Premier County had established a 5-10 to 2-1 lead.

Moloney scored two of her three goals in that opening half, while Orla O’Dwyer, Caoimhe Condon and Mairéad Morrissey also raised green flags.

All of Tipperary’s six starting forwards had registered scores by the 16th minute as Shane Ronayne’s charges piled on the pressure.

Morrissey netted again early in the second half before Moloney completed her treble, with last year’s runners-up Tipperary through to another Division 3 decider.

Wexford were 2-4 to 0-4 clear at half-time, Rowe on target with her opening goal after intercepting a short kick-out.

Murphy took advantage of another goalkeeping error to collect Wexford’s second goal before Rowe was on target again in the second half, with a long-range effort finding the net.

Clara Donnelly scored another goal from distance for Wexford and Roscommon, who used two goalkeepers during the game, were stunned again by Butler, whose attempt from the right wing somehow found its way into the net.

The Division 3 decider is fixed for April 30 and the Division 4 final will also take place on the same day, between Wicklow and Longford.

Wicklow beat Fermanagh by 0-12 to 2-3, eventually getting the job done at the Stabannon Parnells grounds on Sunday.

Fermanagh led by 1-1 to 0-0 early on, boosted by Sharon Murphy’s early goal, before Joanne Doonan’s effort had the Erne County 2-1 to 0-4 clear in the 18th minute.

But Wicklow had fought back to within a point by half-time, trailing by 0-6 to 2-1, and they outscored Fermanagh by 0-6 to 0-2 in the second period.

On Saturday, Longford maintained their seasonal 100 per cent record by seeing off Carlow comfortably on a 5-19 to 2-4 scoreline in Kinnitty.

Longford had early goals from Emer Heaney and Sarah Tierney, helping them to lead by 2-5 to 0-0, before Carlow responded with a three-pointer from Aoibheann Gilmartin.

At half-time, however, Longford had kicked on to lead by 2-11 to 1-2, and they kept the scoreboard ticking over comfortably in the second half.

Michelle Farrell scored two second half goals and Aisling Reynolds added another as the Midlanders completed a 24-point win.

Carlow’s second half consolation goal was supplied by Cliodhna Ni She but Longford were too good on the day.