You are here: Home / Munster Ladies Football Under 16A Championship Final 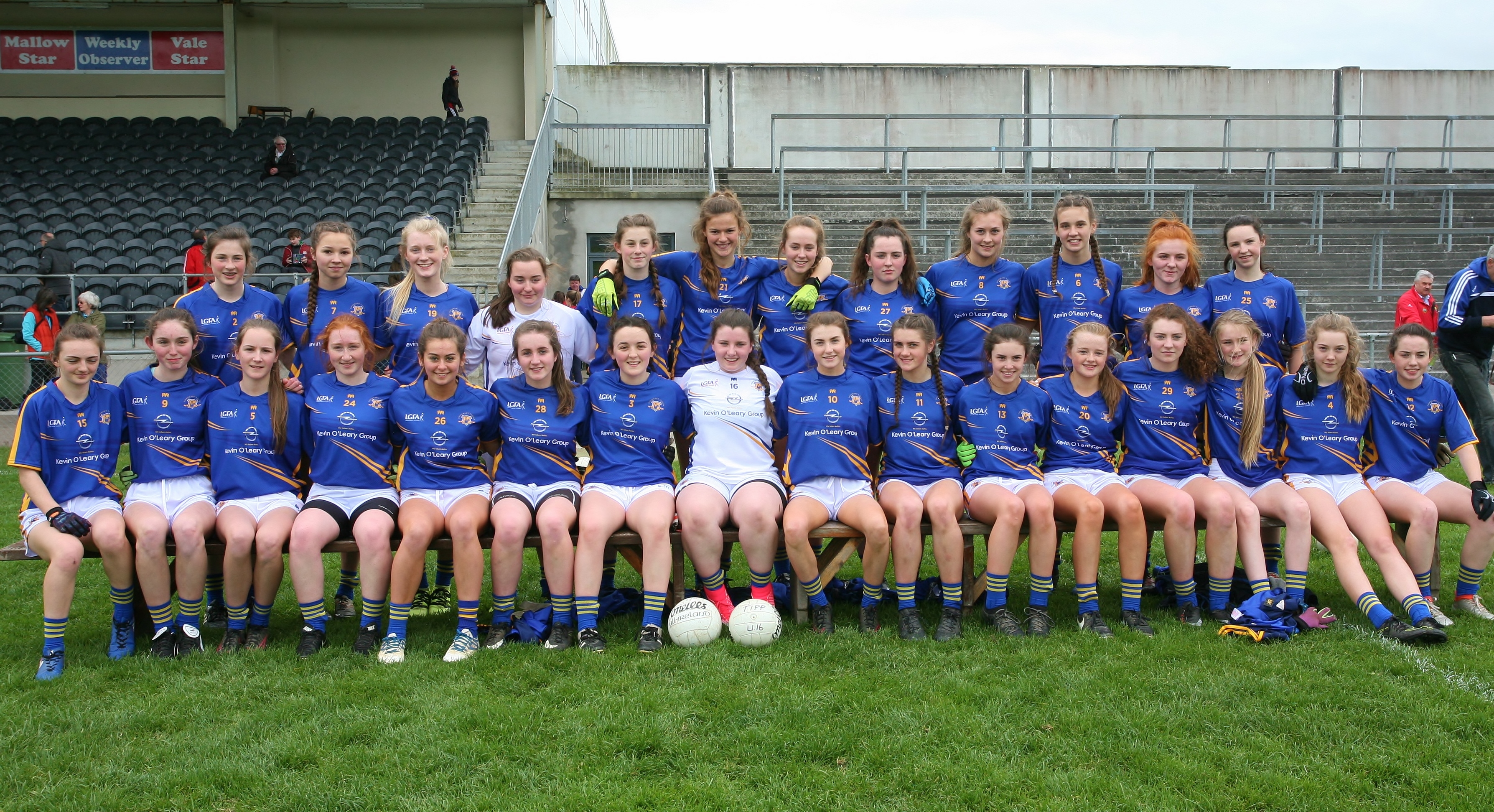 The Tipperary Ladies Under 16 team travelled to Mallow on Easter Monday to play Cork in the Munster Ladies Gaelic Football A Final. Hopes were high following a victory over Kerry and a draw against Cork in the group stages and also considering Tipperary had won the last two All Ireland B championships at Under 14 level. There was a slight breeze favouring Cork in the first half but in general conditions were good. Tipperary made one change to the lineout with Carrie Davey replacing Emma Morrissey.

Cork got off to a great start with a point from a free in the second minute and followed up with another point and goal within the next two minutes. The Tipperary formation had seven defenders with Caitlin Kennedy as the sweeper and Alison Connolly at wing back however they struggled on kick-outs with Cork showing more aggression. Cork added another three points to register a total of 1­­-5 in the first ten minutes. In the fourteenth minute Tipperary opened their account with a point from Caoimhe Ryan and the game was flowing from end to end with Cork raising another white flag in the nineteenth minute. Tipperary were now coming more into the game and on the twenty first minute had a great goal from Caitlin Kennedy following an exchange of passes with Ava Fennessy and within a minute Jenny Irwin added a point to reduce the margin to four points. However, it was Cork who again gained momentum going on to score another 1-5 in the next eight minutes. As the game went into injury time Tipperary hit back with a goal from Angela McGuigan who pounced on a rebounded save following a superb 60 meter run by Caitlin Kennedy. Then in the second minute of injury time the Cork sub goalie deflected a Caoimhe Ryan shot over the bar leaving the half time score line Cork 2-11 Tipperary 2-3.

Tipperary made two changes at half time introducing Orla Winston for Anna Morris and Niamh Ryan for Leah Coen and reverted back to the standard formation of six forwards with Caitlin Kennedy and Niamh Ryan in the half forward line, Orla Winston in midfield and Alison Connolly and Carrie Davey in the half backline. Tipperary got off to a great start with a brace of points from Angela McGuigan in the first four minutes and in the thirty seventh minute Caitlin Kennedy was denied her second green flag with an excellent save from Jane Mulvihill in the Cork goal. Angela McGuigan reduced the margin to five points with a free in the thirty ninth minute and within a minute introduced Ellie Ryan for Caoimhe Ryan.

Tipperary were now enjoying a lot of possession with their defence on top and the game flowing from end to end after some persistent Cork fouling they were reduced to fourteen with midfielder, Faye Ahern sin binned. In the fourth seventh minute Tipperary were awarded a penalty after a foul on Ellie Ryan and Caitlin Kennedy scored her second goal after a scramble for the penalty save. The margin was now reduced to two points and the game was in the melting pot for the next four minutes. However, it was Cork who found a new lease of life and managed to register their first score for twenty four minutes with a goal, then a minute later were reduced to thirteen when wing back Sally McCarthy was sin binned. The game was finished as a contest when Cork extended their lead with another goal from the penalty spot. As the game entered injury time the teams exchanged points with the Tipperary score coming from Caitlin Kennedy leaving the final score Cork 4-12 Tipperary 3-7.