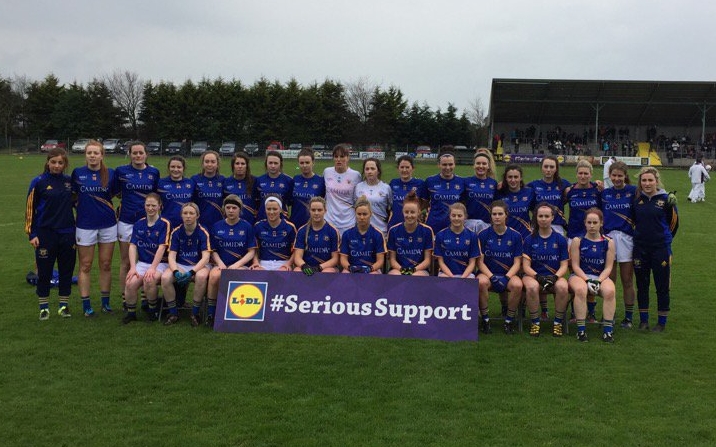 Following their defeat against Offaly in the Lidl National Football League Division 3 Semi Final Tipperary earned themselves a return trip to Clane GAA, Co. Kildare to compete against Wexford in the Final. The two teams met in their first round game of the League in Enniscorthy, Co. Wexford. Wexford had a great start and were eight points the better at half time but two late goals from Tipperary sealed the victory for them on a score line Tipperary 4-10 Wexford 2-10. Both teams finished top of the table in the League and supporters were in doubt that there would be a thrilling Final.

Wexford’s Aisling Murphy opened the scoring in the first minute when she defeated Lauren Fitzpatrick and raised the green flag for her team. In the fourth minute Brid Condon successfully denied Wexford another goal chance but in reply Aisling Murphy, Wexford added a point to the score line in the next minute. Tipperary were unsettled and a high tackle by Aisling McCarthy meant a sinbin for her in the ninth minute. In the thirteenth minute Tipperary were awarded a free and Aishling Moloney pointed for their first score of game. This settled the team and Aishling Moloney pointed another four minutes later. Just as the sinbin was due to finish Aisling Murphy netted for Wexford, the final score of their half while Tipperary continued with two further points from Mairead Morrissey and Aisling McCarthy. Another high tackle from Tipperary meant a sinbin for Jennifer Grant. The final point of the half went to Aishling Moloney leaving the half time score Wexford 2-1 Tipperary 0-5.

In the second half from the throw in Aishling Moloney pointed for Tipperary and the margin was a single point. In the following minute Fiona Rochford pointed a free for Wexford but Aisling McCarthy replied with a pointed free for Tipperary. With very little between the teams points were traded by Fiona Rochford and Aishling Moloney again. Tensions were high and a high tackle on Orla O’Dwyer meant Marica Cullen, Wexford saw the line for ten minutes in the thirty sixth minute. Two minutes later Jennifer Grant returned to the field. Tipperary were held scoreless for the next ten minutes but in the forty eighth minute they were awarded a free which Aisling McCarthy pointed to equalise the game. In the fifty third minute, points were traded again and separating the teams was proving very difficult. Aisling McCarthy swapped points again with Chantelle Martin, Wexford before Aisling McCarthy pointed a free again in the dying minutes of the game. In the final minute Tipperary were awarded a free but denied the opportunity to take it when the referee deemed that they took too long to take it and awarded it to Wexford, Fiona Rochford made no mistake and the game finished level, Tipperary 0-12 Wexford 2-6.

There will be a replay on the weekend of 13th/14th May at a venue and time to be confirmed. Tipperary will have a sense of déjà vu as last year’s League Final also went to a replay.