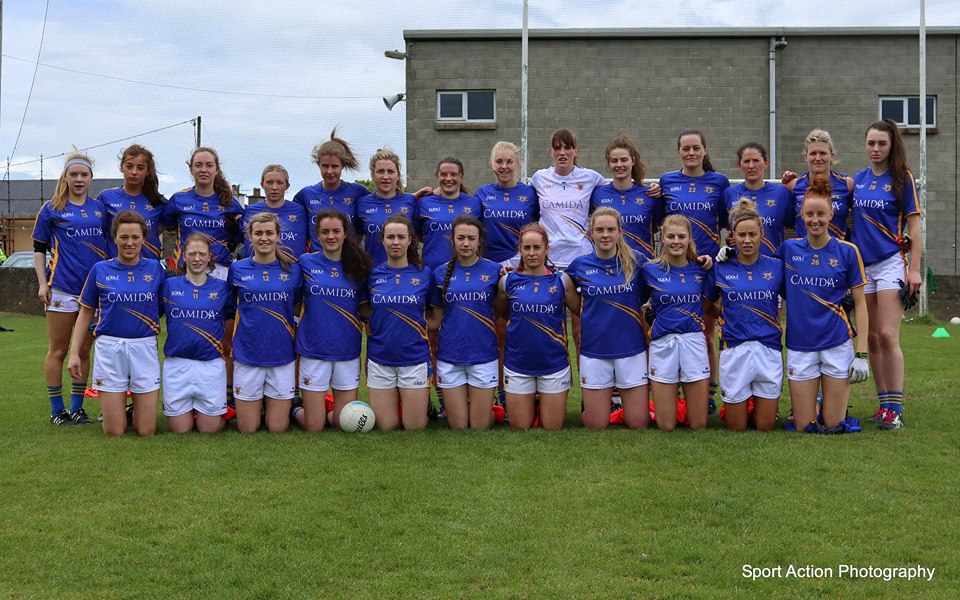 The Tipperary Ladies Intermediate football team opened their championship in fine style in Sean Treacy Park, Tipperary Town on Saturday with a huge win over Limerick. Tipperary had the opening point from Aoibhe O’Shea followed by goals from Evrena and then Sarah Everard. Mairead Morrissey added a point before our attacking half backs, Brid Condon and Laura Dillon scored further points. With less than five minutes played, this early blitz had established a ten point lead. Tipperary were playing exceptionally well with good support play from centre field and the half back line. There was very good movement and selfless passing within the forwards that created the scoring chances. Limerick responded with two points but another goal from Roisin Howard effectively ended the game as a contest and the result never looked in doubt from here to the end. Further goals from Laura Dillon and Roisin Howard as Tipperary scored freely to lead at half time by 5-10 to 0-2.

With the slight breeze to aid them Tipperary picked up where they left off in the first half. On the restart Mairead Morrissey scored a goal followed soon by a Catriona Walsh goal. Tipperary introduced five substitutes while adding to their score tally.  The last score of the game fell to Roisin Howard who rounded off a very good performance with a hat trick goal. Tipperary had a number of players making their championship debut on Saturday and they can be all pleased with their performances. This was always going to a difficult assignment for Limerick. Forced to make three changes before the start they met a well-oiled machine in this Tipperary team which is playing very well on all fronts. Fresh from their League success they completely outplayed Limerick and bought their unbeaten run in competition to eleven games. Despite the big score difference the game was played in a very sporting manner all through.  From here Tipperary will hope to retain their Munster Crown when they play Clare in the Munster Final, scheduled for July 8th and we wish all involved the best of luck.

Shane Ronayne’s juggernaut rolled over another bridge as the Tipperary ladies streaked to a 34-point win against Limerick in a one-sided Munster Intermediate Championship match played at Seán Treacy Park, Tipperary Town on Saturday.

Following on from their division three league final win over Wexford the Tipperary team were, once again, in superb form on Saturday and booked their place in the provincial final against Clare without too much fuss.

Although Tipperary fielded without nine of the team which started against Wexford in the league final replay the Premier County blasted eight goals past a helpless Limerick team. And, Tipperary had outstanding performances right around the field. Maria Curley and Elaine Kelly were superb at the back, Jennifer Grant caught the eye in the middle of the field, Catherina Walsh pulled the strings at centre-forward, Mairéad Morrissey was outstanding and Róisín Howard fired home four goals.

A rampant Tipperary team exploded into devastating action and fired home 2-4 within the first four minutes of this contest.

With a number of key players rested manager Shane Ronayne used this clash with Limerick as an opportunity to hand players like Rachel O'Donnell, Elaine Kelly, Laura Dillon and Evrena Everard their championship debut. And, Ronayne’s strategy was rewarded. Indeed, the Tipperary management team will have a bit of a job to do to pick a starting team next day out given this performance.

Mairéad Morrissey, who is a superb playmaker, set up Evrena Everard for the opening goal in the second minute before Sarah Everard added the second mere seconds later. Aoibhe O’Shea, Mairéad Morrissey, Bríd Condon and Laura Dillon fired over points which presented Tipperary with a 2-4 to no-score lead.

Limerick responded with successive points from Kristine Reidy and Stephanie Nunan, but the Shannonsiders were utterly out-classed and shipped 3-6 without reply during the concluding twenty-three minutes of the opening half. Catherina Walsh (two), Sarah Everard, Aoibhe O’Shea (two) and Róisín Howard notched the points while three goals materialized in the ninth, 19th and 27th minutes. Róisín Howard accounted for all three goals during this period - the Cahir star’s strike in the ninth minute was an utterly brilliant individual effort.

Two minutes into the second half Tipperary pieced together an exceptional attacking move, which featured neat approach play from Sarah Everard and Róisín Howard, before Mairéad Morrissey fired home another goal.

Limerick cracked in a three-pointer of their own within a minute (Áine McGrath), but Tipperary reasserted their dominance of this contest in the 38th minute when Mairéad Morrissey provided the assist and Catherina Walsh stroked home a beauty (7-10 to 1-2).

It is worth noting that Tipperary also spurned gilt-edged goal-scoring opportunities in the 33rd, 37th and 53rd minutes - Jennifer Grant found a post, Sarah Everard hit the post and Catherina Walsh located the crossbar respectively.