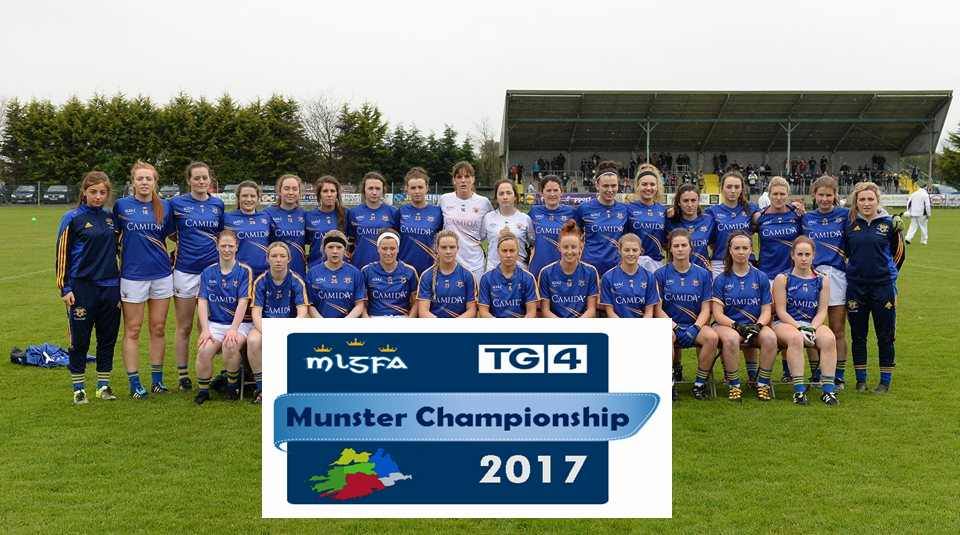 Tipperary successfully defended and retained their Intermediate Munster title against a dogged Clare side in Mallow on Saturday afternoon. Tipperary unbeaten so far this year in League or Championship started the game in impressive fashion. From the throw in, they had the opening score from Aisling McCarthy following a good run from Aishling Moloney. Moloney followed up with a point soon afterwards and the script looked set for an easy day out for Tipperary. However, Clare settled and reeled off six superb unanswered points from play. The Clare forwards were giving the Tipperary backs plenty to contend with. Tipperary were having trouble winning their own kick outs and this piled further pressure on the Tipperary defence. Tipperary looked out of sorts all over the field. An Aisling McCarthy point on the quarter hour narrowed the lead but the inevitable a Clare goal came on twenty minutes and they followed up with three further points from play. The last score of the half went to Tipperary courtesy of an Aisling McCarthy free. Heading to the dressing room nine points down at half time it looked very bleak from a Tipperary point of view.

Uncharacteristic wayward passes and wrong options were in contrast to a rampant Clare side who were creating and scoring good chances. Tipperary had not played to their potential and they looked down and out. The optimists in the large Tipperary following could point to the four goal chances that we were unlucky not to have scored, the realists were talking about damage limitation as we faced the breeze for the second half. Half time score Clare 1-10 Tipperary 0-4.

Tipperary introduced two substitutes just before half time and a further substitution at half time as Orla O‘Dwyer, Niamh Lonergan and Laura Dillon came onto the field of play. A good start was needed if Tipperary were to have any hope of a comeback. Aishling Moloney kicked an early point. This was soon followed by an Aisling McCarthy goal after a great Roisin Howard run. Roisin Howard followed up with a point and the deficit was now down to four points. Clare responded with two points and began to play themselves back into the game. Player of the match Roisin Howard, playing really well was tormenting the Clare backline and scored a point and followed with a goal to put Tipperary back in real contention.

Tipperary had now found new confidence and the fluency associated with earlier games had returned. Centrefield and the backs were now on top and Tipperary continued to pressurise Clare all over the field. Aisling McCarthy pointed to level the game and then delivered a long high ball into Aishling Moloney who rose above her marker and the advancing goalie to punch the ball to the net. Tipperary had re-established their early lead and the Tipperary fans were now ecstatic at the team’s brilliant response. There was still more was to come, Aishling Moloney kicked low at the advancing goalkeeper and Roisin Howard dived bravely to get a touch on the ball and alter its flight path to the net. There was still ten minutes to play as the intensity waned as both sides tired under the warm sunshine. The last score of the day, a point from play, went to Niamh Lonergan who had played an influential second half. Tipperary emerged winners on a scoreline of Tipperary 4-9 Clare 1-14.

The second half transformation was an indication of the Tipperary strength in depth of the Tipperary squad and their never say die attitude and spirit. They are to be commended and heartily congratulated for keeping their heads and refusing to accept defeat when the situation looked very bleak at half time. They re-emerged as a driven team and deserve great credit for getting stuck in and reeling in Clare who had no answer to Tipperary’s determination in the second half. It was a day of contrasts for both teams. The first half belonged to Clare while Tipperary dominated the second and were deserving winners at the final whistle.

Team captain Samantha Lambert accepted the Enda McDonnell Cup, in its inaugural presentation, from Olive McDonnell.  It was a fitting occasion and result to honour Enda’s memory. Tipperary continue their unbeaten run and are now in the last eight of the All-Ireland series. They are due to play again the weekend of August 12/13th. The team and management deserve great praise for the manner of the win and this will surely stand them in good stead as they chase down All Ireland glory in the weeks ahead.