With ten county semi finals up for decision on Sunday afternoon last it proved to be an extremely busy weekend for our Clubs. Teams from Junior C plate all the way to Senior A battled it out for their place on the programme for the last weekend in September. 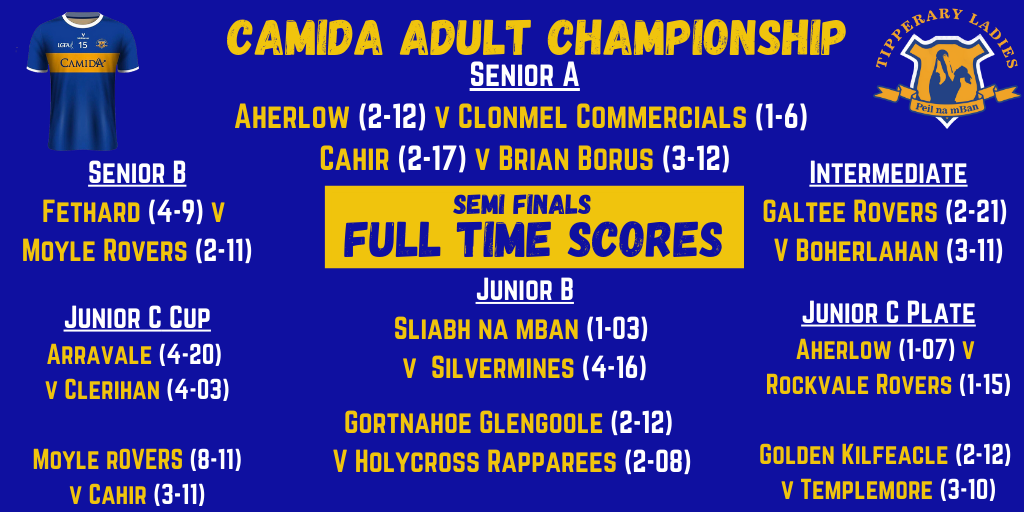 And so we are down to our final pairings.

Cahir will take on the 2019 Champions Aherlow in the Senior 'A' Final. In the Senior 'B' Templemore who have just been promoted from Intermediate to Senior this year will play Fethard. In the Intermediate Final Thurles Sarsfields will play Galtee Rovers who have just come up from Junior 'A'. In our Junior 'A' Final we have Ardfinnan and Moyne Templetouhy again a team who were promoted from Junior 'B' last year. In our Junior 'B' Final we will see Gortnahoe/Glengoole take on Sliabh na mBan and in our Junior 'C' Arravale Rovers will play Moyle Rovers second team. Times and venues of all finals to be confirmed.

Aherlow’s Anna Rose Kennedy made a welcome return to Club football after a ten month absence due to a cruciate injury. The Aherlow and intercounty star was introduced to the play at half time and immediately made her presence felt with the opening score of the second half.

Played in sunny September conditions in Canon Hayes Park, Bansha Aherlow wearing Galbally’s black and white jerseys due to clash of colours, were trailing at the break by 1-4 to Clonmel Commercials 1-5. However Aherlow took control of the game in the second half and held Commercials to scoring just a single point in the second half. Asserting their dominance Aherlow put themselves into a 2-8 to 1-5 lead by the second water break. Commercials only point of the half coming in the fourth quarter of the game. Aherlow finished out the game outscoring Commercials by 0-4 to 0-1. Leaving the final score at Aherlow 2-12 Commercials 1-6. The 2019 Champions will now face the 2018 Champions in the County Final on September 27th next.

Cahir Win Out In Epic Semi

The 2018 Champions made a Lazarus like come back turning a nine points deficit into a two point victory.

At the break Brian Borus were well on top leading Cahir by 2-9 to 1-6. On resumption of play Brian Borus forged on to widen that gap and had a 9 point lead when Cahir kicked into action, treating all present to exciting and enthralling second half with Cahir over turning that lead and claiming victory with just 0-2 to spare. Brian Borus will be bitterly disappointed to have lost this game having led for most of the game but credit is due to Cahir who fought to deservedly take their place against Aherlow in this years final.

The second half began with Fethard slowly getting to the pace of the game and they were getting their scores easier with the wind at their backs and by the water break Moyle Rovers were ahead by 4 points. At this stage the game could have gone to either team but an improving Fethard defence who kept Moyle Rovers to 0-02 in the 2nd half and their forwards who kept going at the Moyle Rovers defence and were rewarded on the scoreboard to run out winners by 3 points on a scoreline of Fethard 4-09 Moyle Rovers 2-11.

Galtee Rovers had a strong finish to see off Boherlahan in the Intermediate Co. Semi Final on Sunday afternoon last in Golden. Despite playing into a strong wind and losing Sara Finane to injury in the opening half Galtee Rovers held a three point lead at the break on a scoreline of Galtee Rovers 0-12 Boherlahan 0-9.

On the resumption Galtee’s aided now by a strong wind pushed further ahead and a golden goal by Fiona Touhy put Galtees firmly in the driving seat. A goal from Boherlahan’s Aine O’Dwyer kept them in it but points from Kate Flannery and Alison Lonergan and a second goal from Alisongoal put Galtees 2-17 to Boherlahan’s 1-10.  Credit to Boherlahan though they fought on scoring two further goals one each from Aliza Mazola and Orla O’Dwyer. However Galtees had too much on the scoreboard and were deserving winners with a 7 point margin