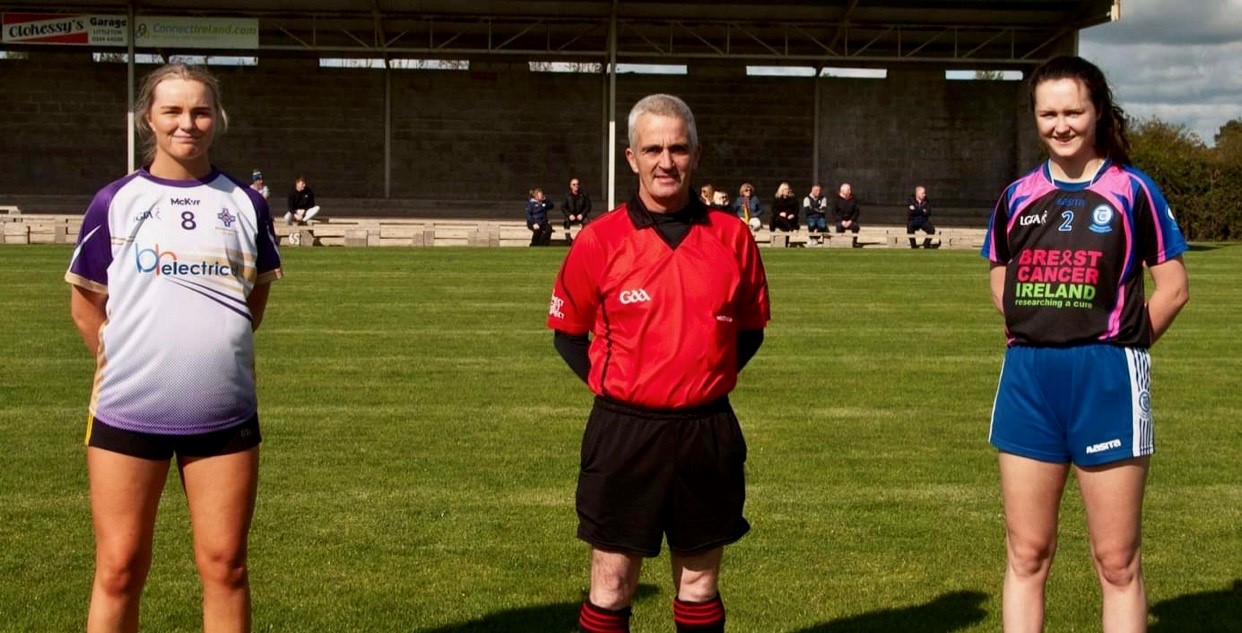 A historic day for the newly formed Rockvale Rovers Ladies Football Club based in the Newport/Ballinahinch area when the Junior Ladies Team won the Junior C Plate final on Saturday last against an experienced Templemore team. The game was played on the excellent pitch in Moycarkey Borris GAA Club. The weather was perfect for football with a slight wind blowing down tithe field from the roadside.

Templemore started the brightest with the always lively Shona McBride causing a lot of problems for the Rockvale rearguard with her direct running. Templemore were in top in midfield and Ellen Delaney and Orlagh Treacy were putting Rockvale under a lot of pressure with their direct running. McBride scores a good point on the run and this was followed by a Templemore goal when the same player went for goal that took a deflection off a Rockvale defender and ended up in the net. Sarah Finn and Blathnaid Ryan worked very hard in the Rockvale defence throughout the first half. At the end of the first water break Templemore led 1-1 to 0-0. Sara

Templemore again started the 2nd quarter the livelier team and Shona McBride scores another point following a good pass from Deirdre Kirwan. Rockvale made a breakaway out of defence and Emma Coleman found Aideen McGlinchey with a pass 65 yards from goal. McGlinchey ran at the Templemore defence and found Ciara Floyd with a pass 14 yards from goal. Floyd swivelled and hit a screamer to the net with a stunning left foot drive. It was game on now and Carragh Flynn was a threat inside and was unlucky with some shots but Templemore responded with a free from Leanne Delaney and another McBride score to have Templemore 1-4 to 1-0 ahead game having played with a slight breeze.

repelling Rockvale seemed to grow in confidence but could not convert scores. Caoimhe McGrath was getting to grips with Shona McBride and Allanah Mullaney was outstanding in the half back line. Templemore however.finished the quarter strongest with 2 further points to put them in a commanding 6 point lead at the last water break.

With 15 minutes to go it was clear to see that Rockvale needed to up their game considerably to have any chance of getting into the contest.

The final quarter ended in a welter if excitement. Rockvale made some more substitutions and with positional changes the North Tipp team thundered into the game. Aideen McGlinchey was now at centre forward and following sterling work from captain Caroline Mullaney who gained possession in midfield Aideen was put through and soloed from 40 yards to blast the ball to the net. It was game on now with 3 points between the teams. Tipp Senior hurler Grace O’Toole now at midfield came into the game winning vital possession and she set up the industrious Emma Coleman for a super point. Coleman followed this up with a point from a 49 yard free. Rockvale were now in the ascendancy and McGlinchey siloed through again only to be denied another goal by Templemore net minder Katie Lynagh who had a brilliant game throughout. It was now all Rockvale with Saoirse McGrath and Roisin Allen on the half forward line working hard to gain vital possession. This persistence paid off and super sub Chelsea King won a ball from 30 yards out. Her blistering run and shot produced another super save from Lynagh but Emma Coleman was quickest to react and roofed the net from the rebound. A 6 point deficit was now a 2 point lead for Rockvale and this turned to 5 points after an error by Templemore was punished by Chelsea King who scored a sensational goal. A further point by Emma Coleman with 5 minutes to go now saw Rockvale Rover ahead by 6 points and this was lead they would not relinquish. Templemore still had chance in the last few attacks but Marie O’Brien in goal was not to be beaten and Thea Curtin used all her experience to prevent any comeback. Centre back Roisin Power was as solid as a rock throughout and did a great job on Templemore danger woman Leanne Gleeson. Orlagh Treacy, Ellen Delaney and Orlaith Maher played very well for Templemore throughout but the comeback by Rockvale Rovers was sensational there was great excitement at the end when referee Martin (Murty) Ryan blew the final whistle.

Templemore were understandably devastated at the end however the display of Rockvale Rovers in the final 15 minutes was breathtaking and they ran out worthy winners by 6 points.

This was a heart warming victory for the newly formed club and hopefully the club will go from strength to strength following this victory with the U14 teams and U16 team in the knockout stages of their respective competitions. 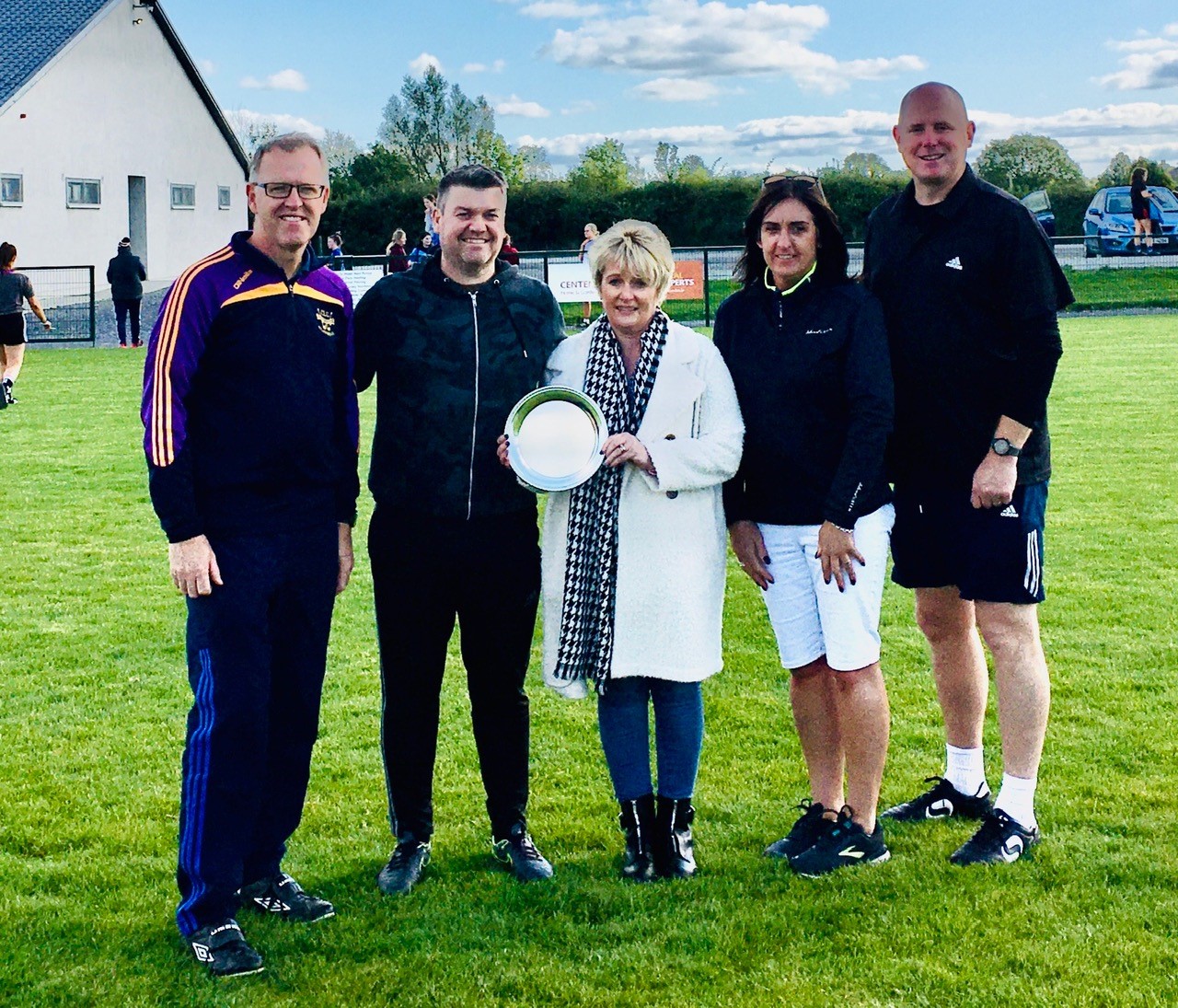