You are here: Home / CK Streaming All Star Awards 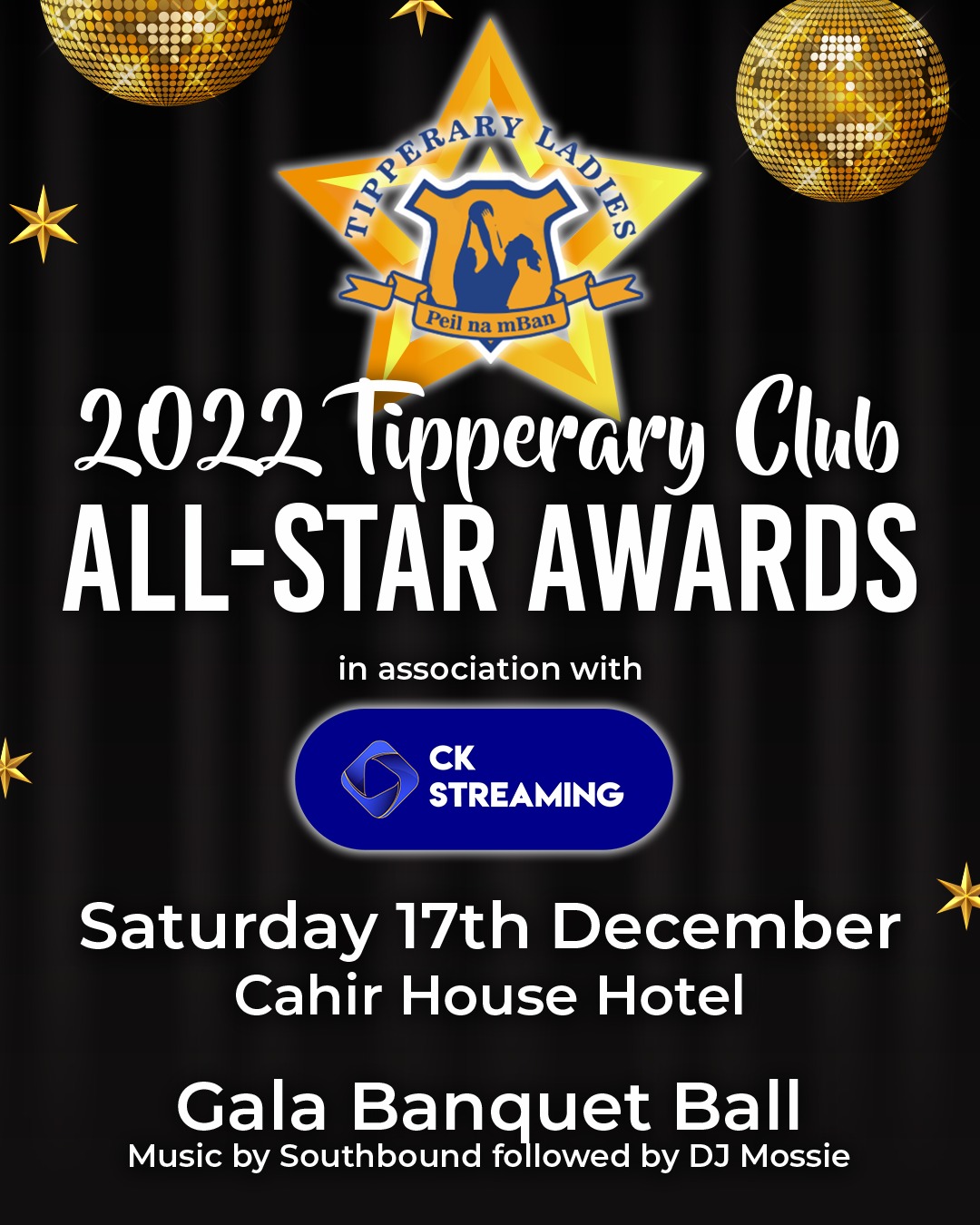 With The Tipperary Ladies Football Adult Championships Semi-Finals due to take place this Sunday, Tipperary LGFA are pleased to announce they’ve teamed up with CK Streaming their official broadcast partners to host an All-Star awards at the end of the year which will see the 15 best players in the Adult Championships honoured along with a Senior, Intermediate and Junior Player of the Year being announced along with a Goal of the Year Award.

The awards will be presented at a Gala Banquet that will be held in Cahir House Hotel on Saturday 17th December and will be broadcast live by CK Streaming.

Michael Towey, Chair of Tipperary LGFA in launching the awards said "We are delighted to launch the Tipperary LGFA Club All Stars Awards in conjunction with CK Streaming to recognise the hard work and dedication of our club players that participate in our Adult Club Championships.

We have a wonderful array of talented players who participate in all 6 grades of our Adult Club Championship which is now entering the semi final stages this weekend with 12 semifinals to be played on Sun 18th Sept for a place in the County Final on the weekend of 1st / 2nd Oct.

The Club Allstars will enable Tipperary Ladies Football and CK Streaming to recognise the Best 15 Club Players in addition to the Senior, Intermediate and Junior Players of the Year with also a Goal of the Year Award to be announced on the night of the Club Allstars."

Speaking at the announcement Tomas Matthews of CK Streaming said “A selection committee was put in place last February to go to adult games in all grades from league to championship to ensure each player is given an opportunity to showcase their talents and put themselves in the shop window for selection. The selection committee are meeting regularly debriefing after each round of games to put a shortlist together for consideration for nomination. The easiest thing to do is sit down after a County Final and nominate 45 players when the players who grabbed all the glory at the end of the year are fresh in the selection committees mind but, with meeting on a regular basis we feel we’ve the best opportunity to pick the 45 best players over the course of the year.”

After the 45 nominations are announced these will be whittled down to the 15 All-Stars who will be honoured on the night.

Three players in Senior, Intermediate and Junior will be nominated for Player of the Year Awards, while a shortlist for Goal of the Year will also be compiled. These awards will be voted on by players and management teams who took part in the various competitions during the year.

Tipperary Senior Football Captain Maria Curley said “club players set out each year with the hope of winning a county medal however, only one team gets that pleasure each year. Players put in a massive effort every year and being recognised on a personal level for this is an honour and brings pride to their clubs, family’s and friends. These awards not only highlight the skill and talent of our players but are also promoting our much loved game. We have to thank CK Streaming and the Tipperary Ladies County Board for all their work in raising the profile of ladies football and promoting our game over the last number of years. It’s a lovely occasion where players from different clubs all over the county can come together and celebrate the talent that lies within Tipperary and I’m sure it will be a great night for all clubs and families involved.”