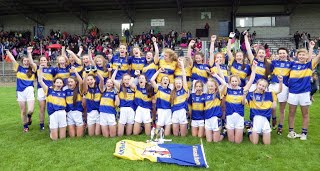 McDonagh Park, Nenagh was the venue for this All Ireland final between Tipperary & Meath under 14 ladies footballers. Meath had come through having defeated Tyrone in their semi final, 4:17 to 3:05. Tipperary had enjoyed a win over a tricky Roscommon side in their semi final, 2:10 to 1:06. Based on these semi final results a close encounter was forecast. The home âadvantageâ would count for little between these two teams on All Ireland final day.

A nine point winning margin would appear to indicate a comfortable win in this yearâs under 14 âBâ championship. However those present would argue against this result being anything but comfortable. For three quarters of this enthralling encounter Meath were well in contention and taking the game to Tipperary. Meath began with serious intent and within four minutes were two points up on the Tipperary ladies who were playing with the advantage of a strong breeze. At times the Tipperary defence looked about to be overrun but gradually they clawed they way back into this game. In the seventh minute Clonmel Commercials Ava Fennessy had Tipp's first score to settle the side. In the eleventh minute full forward Boherlahanâs Ciara Dwan drew the sideâs level with her first point from play. The game now see sawed back and forth with both sides seeking an advantage. Tipperary were guilty of some bad wides in this period but when Tipperary and Fethardâs Niamh Hayes combined beautifully with Ava Fennessy  and Leah Clancy for Tipperaryâs first goal in the fourteenth minute it appeared Tipp were in the ascendancy . This goal was immediately followed by a point from Ava Fennessy and Tipperary looked to be in the driving seat.

Not to be outdone Meath now rallied and in the next three minutes scored two goals and a point to take the lead back. The Meath goals had come from Alannah Boland who was causing problems with her powerful runs. The Tipperary defence were now under considerable pressure from marauding Meath players and time and time again Fethardâs Alison Connolly was to the fore in breaking up these attacks. Alison at half back was outstanding in her reading of the play and at a period when Tipp needed to be strong she showed the way. Tipperary got to grips with the game once more and finished the half with five unanswered points from Ava Fennessy (2), Ciara Dwan, Carrie Davey and Caitlin Kennedy.  Tipperary appeared to have weathered the Meath storm and held a two point lead at the interval, 1:08 to Meathâs 2:03 but now faced the prospect of playing into a very strong breeze and squally showers for the second half. 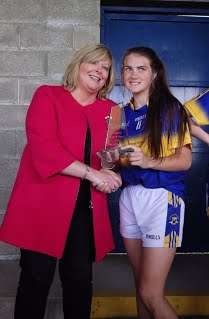 Meath were first to attack in the second half but registered a wide after which Tipperaryâs Leah Clancy had a well taken point after the ball was worked through the hands upfield. Ava Fennessy was now getting onto more ball for Tipperary and her strength at centre forward would prove vital. She followed up with a point for Tipperary but Meath came right back again and Tipp goalie Saoirse Teer made a fine block when a Meath goal looked certain. Tipp cleared their lines but once more Meath struck for two well taken points in the eight and tenth minutes to again close the gap. With only two points between the sides the next score would be vital and when Tipperaryâ Ava Fennessy took on the entire Meath backline and finished to the net it was exactly the tonic the Tipp ladies required. The game was now turning in Tippâs favour with the Tipp ladies playing lovely controlled football and maintaining possession against a very physical Meath team.  The Meath physicality would prove their undoing as referee Cathy Forde had by now shown yellow cards to two Meath players for persistent fouling in the 23rd and 25th minutes. Ava Fennessy had her third goal from play in the 25th minute and try as they might from here on Meath could not penetrate the Tipp backline. They laid siege to the Tipp goals for the remaining three minutes but Tipperary were content to soak up the pressure and attack on the breaks. Meath finished with two points from a free and open play deep into injury time when goals were required.

En route to this final Tipperary had defeated Limerick (twice), Waterford, Clare, Cork & Roscommon so these girls certainly have earned their All Ireland victory. 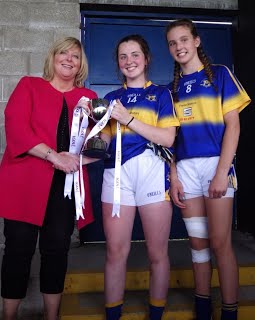 The All Ireland Cup was presented by Marie Hickey, President LGFA to |Tipperaryâ joint Captains Ciara Dwan & Caitlin Kennedy. For her contribution to the teamâs success Ava Fennessy received the trophy for Player of the Match. Her contribution was immense, scoring a personal 3:04 on the day. Tipperary have now done âtwo in a row â in this grade, no small feat in such a competitive competition.