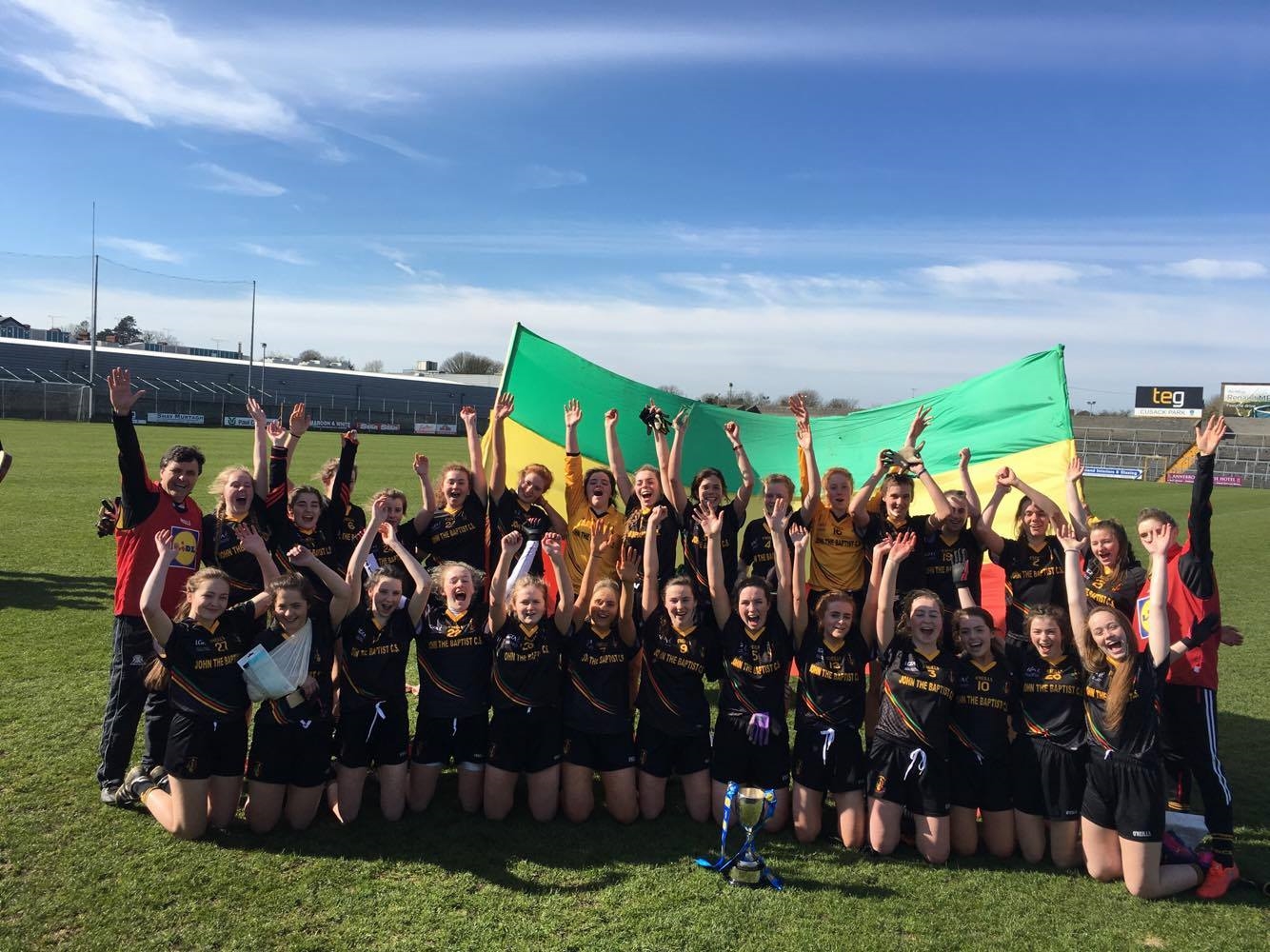 THREE down, two to go! John the Baptist Community School, from Hospital in County Limerick, claimed another All-Ireland title on Friday afternoon, when they were crowned Lidl PPS Senior A ladies football champions.

It’s their third All-Ireland win of the season, following on from two camogie successes.

The school’s senior B hurlers will contest the Paddy Buggy Cup decider in Thurles on Saturday and there’s still a junior football crown to be won too.

Key forwards all season, Andrea O’Sullivan and Anna-Rose Kennedy stepped up to the mark at Cusack Park in Mullingar as John the Baptist saw off St Ciaran’s of Ballygawley by four points.

The sides registered 25 wides between them on a blustery afternoon but there were still moments of true class – with O’Sullivan and Kennedy to the fore.

Between them, they collected all but one point of John the Baptist’s final total – with sub Ashling Ryan also chipping in with a point.

At half-time, John the Baptist were 2-2 to 0-4 clear, centre forward O’Sullivan netting in the 23rd minute before full-forward Kennedy struck six minutes later.

It was no more than John the Baptist deserved as a number of chances went begging in the first half.

They registered ten wides before half-time and just seconds after the game began, Kennedy found herself one-on-one with St Ciaran’s goalkeeper Darcy Byrne, who made a fine save.

Canavan kicked three fine points from play to establish an early lead for St Ciaran’s before Kennedy opened John the Baptist’s account in the 21st minute.

Their first goal arrived from O’Sullivan, with Kennedy the provider, before Eimear Kirby and Sara Morrissey combined to set up Kennedy for her three-pointer.

Despite playing against the breeze, John the Baptist looked the more potent outfit in the first half and while it took a while for scores to come, Caitlín Kennedy and Anna-Rose Kennedy had other chances before the goals finally arrived.

Captain McCaffrey was the other St Ciaran’s scorer in the first half – but those goals for John the Baptist gave them a solid platform ahead of the second period.

Despite tiring legs, they held onto their lead, as the closest St Ciaran’s could get was two points.

John the Baptist managed to keep the scoreboard ticking over, as St Ciaran’s became increasingly desperate in their quest for scores.

St Ciaran’s were 0-8 to 2-4 behind before O’Sullivan and Kennedy stepped up with big points.

O’Sullivan was on target in the 46th minute and Kennedy’s effort four minutes from time proved the insurance score, as St Ciaran’s were held scoreless from 13th minute of the second half.

John the Baptist were junior B All-Ireland champions in 2015, senior B winners last year and have now taken another huge step forward.