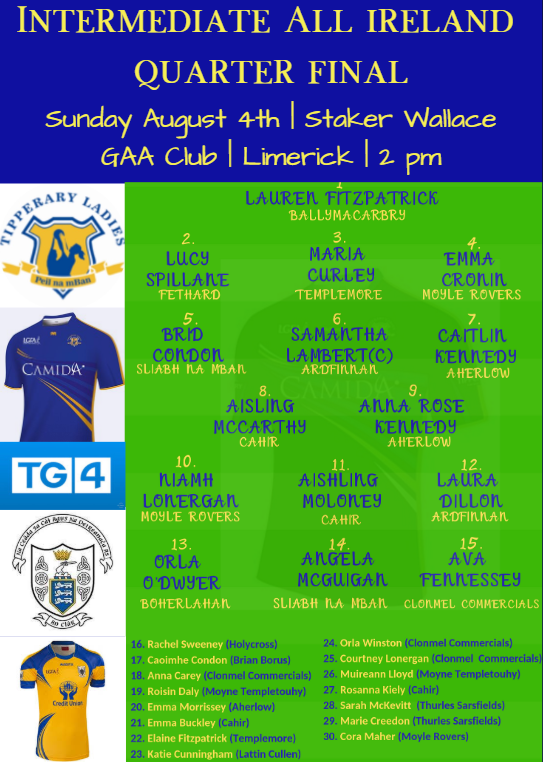 The Tipperary team got the fright of their lives at Staker Wallace in Limerick on Sunday afternoon when the Premier County just about edged a cracking contest with Clare in the quarter-finals of the TG4 All-Ireland Ladies Football Intermediate Championship.

Clare were absolutely relentless in this contest and thanks to a Niamh O’Dea goal in the 48th minute the Banner led 2-8 to 1-9. Although Tipperary led by a point at the break (1-5 to 1-4) and were playing with the aid of a strong breeze in the second half it was Clare who set the pace and were reasonably good value for their narrow lead.

With Clare tracking the Tipperary runners superbly and blocking Aishling Moloney’s route to goal on a regular basis the side managed by Shane Ronayne looked to be in trouble. Tipp, however, settled down and fired a rousing 0-4 without reply to book their place in the semi-finals.

Although you would not describe this performance as a vintage display Tipperary started well and led 1-2 to no-score with eleven minutes on the clock. Ava Fennessy and Orla O’Dwyer scored early points and although a Fennessy goal chance was saved in the fifth minute Angela McGuigan was fouled for a penalty which Aishling Moloney buried in the top left hand corner in the 11th.

Róisín Considine and Orla O’Dwyer then traded points before Niamh O’Dea buried a superb Clare goal in the 16th minute. It is worth noting that Tipperary ‘keeper Lauren Fitzpatrick also did especially well to save from Fidelma Marrinan in the 13th and 17th minutes. 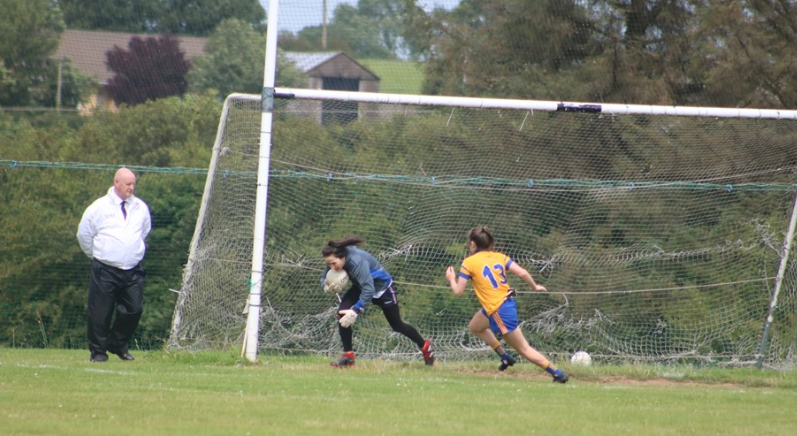 Ailish Considine closed the gap to one in the 21st minute and although Aishling Moloney scored two points (one free) for Tipperary prior to the break Eimear O’Connor and Niamh O’Dea responded for a Clare side who appeared to be growing in confidence (1-5 to 1-4).

Despite playing into the wind Clare fired the first three points of the second half (thanks to Fidelma Marrinan, Gráinne Nolan and Niamh O’Dea) to lead 1-7 to 1-5 with thirty-eight minutes on the clock.

Angela McGuigan set up Aishling Moloney for a vital Tipperary point in the 40th minute and although Niamh O’Dea hit back for Clare it appeared as if the Premier County had turned a corner. And, especially between the 42nd and 46th minutes when three successive scores edged Tipperary into a 1-9 to 1-8 lead entering the final quarter. Aisling McCarthy (two) and Aishling Moloney were responsible for this scoring surge.

Clare refused to relent, however, and when Niamh O’Dea punched home a goal in the 48th minute this game was well and truly up for grabs (1-9 to 2-8).

A brace of Aishling Moloney points (one free) tied the game with eight minutes to play, but Tipperary may well have conceded a third goal in the 53rd minute had Lauren Fitzpatrick not saved Tara Kelly’s shot.

Aishling Moloney fired Tipperary into the lead in the 54th minute and although the Cahir star was denied a goal soon after when Clare ‘keeper Ciara Harvey conjured a terrific save Moloney booted over an eye-catching free in the 58th to leave a tantalising two between the sides.

Aishling Moloney was sin-binned soon after, but Tipperary saw out the remaining minutes of this contest in impressive fashion and actually created two more opportunities - Angela McGuigan saw a goal chance saved in second half injury time while an Ava Fennessy effort was blocked down.

The semi-finals are scheduled to take place on the week-ending August 18 while the Mary Quinn Memorial Cup will be up for grabs on Sunday, September 15 at Croke Park, Dublin when the TG4 All-Ireland Ladies Football Intermediate Championship final takes place.

Tipperary, of course, were crowned All-Ireland intermediate champions as recently as 2017 when beating Tyrone so famously in the decider (1-13 to 1-10), but were cruelly relegated from the senior grade in the 2018.

Manager Shane Ronayne (Mourneabbey, Cork) is joined on the management team by Tony Smith (Moyle Rovers), Ed Burke (Moyle Rovers) and Sarah Jane Darmody (Ardfinnan) while James O’Leary (Arravale Rovers) takes responsibility for the strength and conditioning of the side.